Congratulations to Saoirse O’Driscoll (Forward), Aoife Purtill (Centre-Mid), Niamh Purtill (Mid) and Kate Stuart Trainor (Right-Mid), who have each been selected to represent Connacht Hockey in this year’s U16 inter-pro competition. 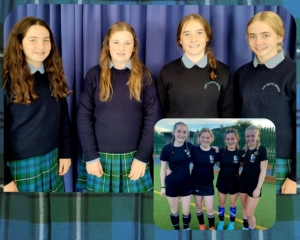 The girls displayed their skills during a series of trials over a number of weeks during May and June. 120 girls were invited to trials in Dangan, Co. Galway with cuts being made each week. A final squad of 35 players was selected, with further match-day selection taking place before each game.

Kate and Aoife were selected for the province’s first away fixture against Leinster, which was played in Multifahrnam on September 4th. Kate also had the honour of co-captaining the side on the day.

The girls are awaiting word on match-day selection for the side’s second game against Ulster on October 2nd.

Eagle-eyed Irish selectors are present at each inter-pro match, scouting for possible players to make up the national side.

We are very proud of each of the girls and we wish them every success in this year’s competition. Congratulations to their school coach, Gudgie Moran and club coaches at Athlone Hockey Club, Sinéad Purtill, Richard Ross and Kathryn Joyce-Whyte.