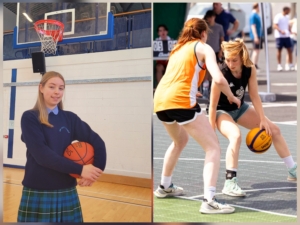 Congratulations to 5th Year Georgia Munnelly, who has been selected to represent Ireland on the U18 women’s basketball squad for the 2022-23 season.

Georgia has previously been selected for the Irish U16s squad, but unfortunately due to injury did not see international action that season. She has been a stalwart member of Our Lady’s Bower school teams since 1st Year. A former player with Athlone Basketball Club, she now plays her club basketball with the Liffey Celtics U18s and is a member of their Superleague team. She continues to coach for the Athlone club and is no doubt an inspiration to all the underage players who benefit from her skill and guidance on a weekly basis.

Trials for the national side took place towards the end of the summer which saw over 80 players whittled down to the final 24-woman squad. She has had 6 intensive training sessions since selection in November and is excited to represent her country in a number of friendlies that are planned for the new year. These fixtures will build towards the chance to represent Ireland at the FIBA U18 Women’s European Championships next summer.

All in OLB are very proud of Georgia’s sporting achievements to date and wish her every continued success as the season unfolds.