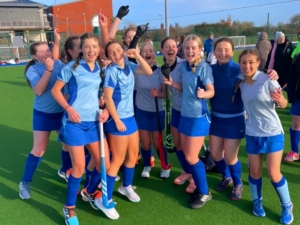 Congratulations to the Junior A Hockey team, who were crowned Connacht Champions in the Griffin Cup on Thursday November 24th, after their 2-0 victory over Galway’s Coláiste Iognáid.

While OLB held the majority of possession, the threat from the always formidable Galway side was evident throughout. The Bower players displayed great skill and mature gameplay.

Both sides had chances to score in regulated time, but neither found a way through the defence.

The Bower increased their work rate and really put the pressure on, and the goals came in extra time, both from

short corners and both expertly finished. The first from the stick of Niamh Purtill and the second slotted home by her sister, Aoife. There was a great teamwork and linking play on every inch of the pitch.

Wonderful support rallied the girls from the sidelines too – Bower girls, family and friends all cheered the team right up until the final whistle.

Well done to the entire squad and to Coach, Gudgie Moran – a well-deserved finish in the side’s unbeaten season.