A Celebration of Linguistic & Cultural Diversity

A Celebration of Linguistic & Cultural Diversity 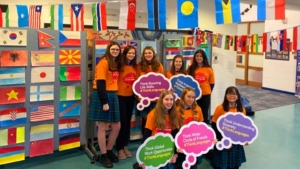 On November 21st we celebrated #ThinkLanguages, an event that celebrates language-learning, as well as the rich linguistic and cultural diversity in our school. The entire day was organised and coordinated by the #ThinkLanguages Champion Team, who worked tirelessly over the past two months preparing events and activities for the whole school to enjoy. The Team also decorated the school corridors with flags, depicting the 60+ nationalities represented within the school community.

The Day began with the #ThinkLanguages opening ceremony, where TY students got to enjoy talks from a number of famous people who have made successful careers out of languages, including TikToker Mandy Cherie and CEO of the Olympic Federation of Ireland, Peter Sherrard.

Four linguistically and culturally diverse students delivered language-based workshops to their peers on the day. 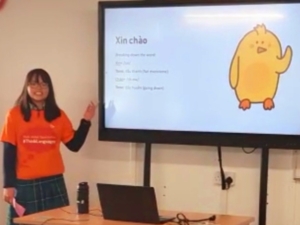 TYs also received career talks from four young people who have enhanced their careers through being multilingual.
– Caoimhe Kelly, marketing executive based in Paris, spoke to students about the advantages of combining languages and business.
– Criostóir King from the EU Environmental Agency, spoke to students about combining languages with STEM.
– Kate Hall, who works in the European Parliament in Brussels, spoke about how necessary it is to be multilingual in order to secure work in EU institutions.
– Déarbhla Hennessy, Feminism advocate based in Angers, France, spoke about her work in the Irish Embassy in France.
Many students commented that these talks gave them a fantastic insight into careers with languages, beyond the obvious choices of teacher, translator and interpreter. 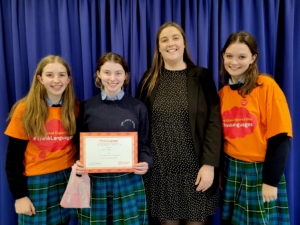 A number of competitions and events took place through the day for the whole school to enjoy including an international cookery competition, where over 50 students made an international dish to share with the school, a poster design competition whereby students had to design a poster depicting what languages mean to them, and a Spain vs Ireland volleyball match through Spanish.

Undoubtedly, the highlight of #ThinkLanguages Day was the languages Whodunnit “Who Kidnapped Ms Windle?”. It was announced that Deputy Principal Ms Windle had been kidnapped and that there were four key suspects – Ms Finneran (Irish teacher), Ms Cooney (French teacher), Ms Quilty (German teacher) and Ms Kenny (Spanish teacher). All suspects refused to speak to anyone who would not respond to them in their respective 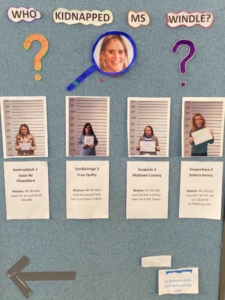 languages. A series of clues in different languages were hidden around the school and students had to use both their language skills and their detective skills to solve the case. Congrats to Hannah, Mary and Amelia from 1st year who were the first to solve the case correctly. The MFL department was thrilled to see so many students using their language skills outside the classroom.

Our Think Languages Champion Team discovered that there are over 67 different languages spoken in Our Lady’s Bower. Deputy Principal, Ms Windle commented that #ThinkLanguages was a wonderful opportunity to celebrate this rich cultural diversity within the school community.

The school would like to express its sincere thanks to all those who played a role in making #ThinkLanguages Day such a success including each of the guest speakers, the MFL department, school management and Post Primary Languages Ireland. A special word of thanks to our #ThinkLanguages Champion Team of Evie Welton, Ellie Denby, Ceara Dwyer, Caitlin Dungan, Áine Moran, Caoimhe McCarthy, Kathy Tran and Ailbhe Nash. They put in a huge effort to organise the hugely successful event.